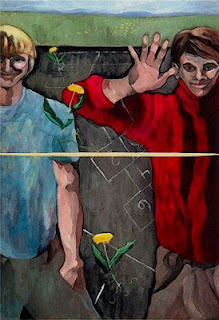 
This paper was written by a Vickie Bray, an art student at Montana State University-Billings who not only wrote an 'A' paper...she also published it in the Billings Outpost.

Cory Jaeger is a native of Billings, Montana. She attended the Montana State University of Billings, graduating in 1995 with a B.S. in Psychology and a Minor in Art, earning high honors and an award for academic achievement. Her studies focused primarily on the healing power of art, as well as its application in psychoanalysis.[1]

The overall content of the exhibition is thirteen paintings that convey some of Ms. Jaeger’s feelings and perceptions regarding her personal relationships with men as well as providing a perspective and commentary on the role of men within contemporary society. The primary medium is lightly textured acrylic on canvas. However, closer examination reveals portions of subtle collage created by incorporating bits of paper with handwriting done in ink, printed words and images, ribbon and razor blades. There are two motifs that reoccur frequently; flowers and alcohol and/or barroom scenes. Of the total, eight have flowers and four juxtapose either barrooms or booze with flowers. It is interesting to note that there is one scene that depicts a bar of a different type; that of a Denny’s Restaurant. It has no flowers.

Thematic concentration of color is accomplished predominately by muted variants of red and burgundy accented by the gradation of blue and teal shades. Undertones of mauve and gray unify the pieces of the collection. While most of the works are balanced asymmetrically; Transsexual Roses is the exception. There is intriguing use of repetition, linear rhythm and perspective within many of the works, including the Turtleneck Boys who almost disappear into the expected vanishing point. Atmospheric perspective is also employed as “Her figures float in and out of the framework, some not even touching the ground, emphasizing a dreamlike memory that surpasses reality. Details such as recurring images of flowers refer to the artist’s presence in each of her works: from the dandelions and jonquils of her youth, to the roses of her more mature relationships.”[2]

There was a profusion of emotional facets within this postmodernist collection. I was comfortable interpreting some of the more easily perceived literal or figurative aspects; i.e., the maturation process, sexual awareness, sexism, machismo, personal growth, forgiveness, disillusionment, healing, alcohol abuse, identity search and humor laced with pain. However, I also sensed that there was much more to be uncovered here than what was evident.

I found myself completely baffled by the meaning of the razor blades which are present in several of the pieces; most notably in Dandelion Kings. At first glance it is just a picture of two adolescent boys. There is a backdrop of a field of yellow flowers and the representations of a playground with a hopscotch pattern and swings. Three dandelion flowers are superimposed on the figures and each is covered at the base by a razor blade.

I was most intrigued and puzzled by the work titled The Marquis Always Used Blades to It is clearly not portraying the current era. It depicts an artist at his easel painting a partially nude female form. Embedded within this figure are tiny pieces of collage with somewhat indistinct images of various animals, faces, and buildings. Her hand is cut off and “bleeds” on the painting. The artist’s back is to the viewer. Behind him is an expanse of what appears to be a garden with several female figures seen in the hazy distance. To his left is a guillotine with red roses entwined upon the frame. It rests, as does the painter, on a bed of rose petals covering the platform of the guillotine. Scattered beside the platform are broken pieces of a nude female sculpture. The chair legs of the artist’s seat are female legs with red shoes that are a part of the rose petal carpeting. It appears he is “mounting” the torso by the manner in which he is sitting.

I appreciated the use of iconographic symbols of male power, i.e. the fedora, pinstripe suit, biceps[3], “tough guy” images, booze and the reversal of the classic female nude in Adonis of the High School Jocks. Historically the majority of the female nudes were portrayed with modestly downcast eyes. Since Ms. Jaeger’s subject reclines with sunglasses, he is similarly unable to return our gaze. The symbols of his “maleness”, his football uniform and helmet, are discarded on the floor beneath him and scattered appropriately with narcissus.

The presentation begins with bar scenes that accent the “machismo” and ends with the smaller three piece grouping of Transsexual Roses, Tough Guy in Front of Lace Curtains and Men at Denny’s. I perceived an emergent awareness regarding sexual stereotypes that gradually evolves throughout the exhibition. These last three seem to indicate a “softening” of the maleness that is so predominant in many of the other pieces. The tough guy character hides behind a zipper of femininity, another one is coupled with lace curtains and drinks a Pepsi. And finally, the coffee shop “bar” scene could represent the acknowledgement of a life no longer tormented by the ravages of alcoholism.

The more time that I spent with the images, the more compelling they became. I found myself quite curious about the artist’s intentions. Ms. Jaeger graciously agreed to meet me for coffee. She solved the mystery of the razor blades with an analogy of the “sharp and sometimes painful” aspects of relationships, whether they are of the cutting juvenile playground variety or the more adult love-hate versions we often experience later in life. Her “Marquis” was a dream state rendering of a bittersweet relationship that, although it was difficult, was also the catalyst for great gifts; an amalgamation of love, hate, desire, negatives and positives infused with currents of victimization, sacrifice and reflection. I thoroughly enjoyed my time with her, and I believe that she liked some of my interpretations and insights, which were not necessarily the same as her intentions. I quite honestly look forward to seeing more of her work as she expressed plans to further develop this thematic concentration. It seems virtually limitless in application, interpretation and relevance to the times in which we live.

Ms. Jaeger paints in an expressionist manner, incorporating aspects of surrealism with meaning and metaphor. This collection begins by revealing the innocence and vulnerability of childhood gender recognition, which transitions into the awakened hormonal turbulence of the teen years, undergoes another metamorphosis into the sexual exploration of young adulthood, flirts sensually and humorously with a reversal of traditional gender objectification and finally arrives at an adult awareness that is tempered by the still unanswered queries of a social order in transition. Contemplating these depictions of the dubious advancement of social and sexual equality, I found myself conjuring up comparable scenes and forgotten but still poignant memories from my own life saga.

Congruent with this very personal accounting, there is the pervasive positing of a society still silhouetting, yet stretching beyond, the “traditional” life roles that have been historically and predominately determined by gender. It was an instrumentally effective presentation. Without any overtly feminist ploys she presents the issues of sexism squarely before the viewer. With this gentle treatment of a complex and difficult subject, Ms. Jaeger invites us to look inwardly as individuals and collectively as a culture.

This display can be viewed at the Yellowstone Art Museum through January 12, 2004

Posted by Cory Jaeger-Kenat at 10:49 AM No comments: