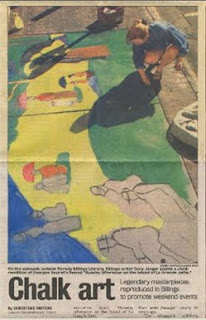 A 19th century canvas of a light-filled Paris park inspired a 21st century creation on a summery Billings Tuesday.

The much-admired painting introduced Seurat's pointillist technique of painting tiny dots of basic color that fuse in the viewer's eye rather than on the artist's palette. It also inspired the Tony-winning Broadway play, "Sunday in the Park with George," nearly 20 years ago.

The shopgirls, soldiers, tourists, and servants of Seurat's canvas were reborn with intense chalks replacing the Frenchman's paint.

Jaeger said, "We thought it was a good choice for the library's 100th birthday, because it comes from the era. It's Depot Days' present to the library."

And, she said, "It's moody and tells a story, plus it lended itself to the bright pigments that chalk art offers."

Jaeger said that she went through about $20 on the Tuesday painting, which took a couple hours to complete with elbow grease and bright chalk after she roughed out the initial sketch.

She is one of several artists painting on sidewalks throughout the week, donating time and talent to promote Saturday's Chalk Art Festival during Depot Days on Montana Avenue.

The temporary nature of the chalk art is part of its charm.

One of this week's chalk artists, Carol Welch, said, "It's also a wonderful way of introducing classic paintings to the public, of drawing attention to the artwork."

Encoring the Seurat rendition will be sidewalk collaborations of Monet's "Water Lilies" and Picasso's "Bouquet with Hands", along with an original piece.

"We're just thrilled to have these artists painting on the sidewalks all week," said Vicki Van Buskirk, owner of Toucan Gallery. "There's a magic to chalk art because it's temporary and vibrant, and your canvas is a sidewalk."

Van Buskirk recalled that, one year after festival, a huge rainstorm made polka dots on the sidewalk art and blurred everything.

Montana Avenue merchants would like to leave the art around for a few weeks.

"The ghosts live on after the festival, and it's fun to see people walk by and study them," she said.

Chalk art has a history in the United States, and there are even chalk-art websites.

Robert Knight, executive director of the Yellowstone Art Museum, said chalk-art fests thrive all over the world. He has been involved in several in earlier museum jobs in the Southwest.

"I'd love to work with the Depot folks in securing one of the well-known chalk artists for next year," he said. "The chalk festival goes right along with my notion to expand the arts beyond the walls of the museum facility."

Europeans have a long history of chalk art, and in the 1960s United States, hippies celebrated the times of chalk art as a way of passing on the masters' concepts and creating a fun social event.

And, Van Buskirk said, "We'd like to get more of our own regional and local fine artists to participate, along with bringing in an expert."
Posted by Cory Jaeger-Kenat at 12:52 PM No comments: 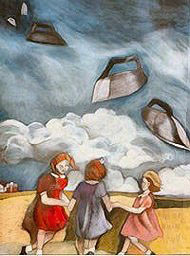 Cory Jaeger's pastel and paper work is titled "The Making of Little Ladies".


"Pressed Beneath a Heavy Sky"--new pastel works by Billings artist Cory Jaeger--will be featured at the Toucan Gallery on Montana Avenue through June and July.

In these personal pieces, Jaeger explores repression in women's lives.

"Not long ago, when I visited my great-aunt in North Dakota to celebrate her 80th birthday, I came to realize that that vast, flat and open landscape had undoubtedly shaped my life--even though I was born and raised in Billings," said Jaeger. "I realized that the harsh practicality of that farming culture rubbed my spirit raw. But I realized, too, that same harshness had given me my sense of integrity and an iron-clad work ethic."

In addition, Jaeger noted, "that same environment had also convinced me that my creativity was somehow a disfiguring, shameful flaw. This show is for all those women, who are sorting through all the 'shoulds' and striving valiantly to reclaim who they truly were before they were made into nice little ladies."

Jaeger conducts a variety of workshops and classes in the region. In addition to the Toucan Gallery, Sutton West in Missoula, the Danforth Gallery in Livingston and iTheo.com of San Francisco represent her.

Her work has been selected for nationally juried competitions.

"Pressed Beneath a Heavy Sky" shows through June and July at the Toucan Gallery, 2505 Montana Avenue. The public is invited to meet the artist at the opening night reception at the Downtown Artwalk tonight from 5 to 9 pm. For more information, call the Toucan Gallery at 252-0122.
Posted by Cory Jaeger-Kenat at 12:33 PM No comments: