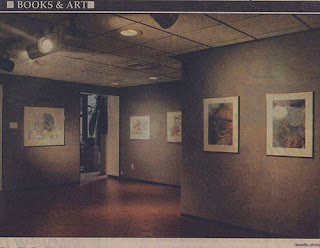 The "Six Pack" show, photographed this week at MSU-Billings, moves tonight to ArtSpace. Above is a sampling of the watercolors, oils, drawings, and photography.


A half-dozen women artists from MSU-Billings have put their work together in a varied, contemporary show entitled "Six Pack." They also use that handle to refer to themselves and their unified effort.

"Six Pack" artworks by the sextet, goes on view this evening at ArtSpace, in downtown Billings, where it remains up through Sept. 29.

Four of the women have collaborated since spring of 1993, when they began painting and exploring other artistic pursuits together. The other two have joined the effort since.

The MSU-Billings show, which moved this week from the Outer Gallery on campus, represented the first formal collaboration and all 40 pieces from that show have been transported to ArtSpace, at 2919 Second Ave. N.

According to Julie Brant, the collaboration has been successful in lending energy and enthusiasm to the group as well as individual efforts.

She organized the first show, and the artists hope to continue to show their work as a unit.

All plan careers involving art, whether teaching or running their own studios.